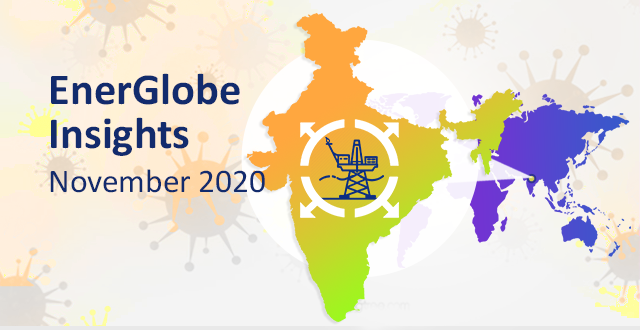 Over the last few years, the oil market supply dynamics have been constantly changing due to USA emerging as a supplier and shaking up the OPEC+ stability, the Russian sanctions,political crises in major suppliers like Venezuela and growing tensions in Iran and the Middle East. In addition to this, COVID19 has put paid to hopes of market revival and is likely to change market structure, geo-political scenario and supply – demand balances. The economic slump in the last six months has put a severe stress on global energy. Since there are no takers for excess oil supply, the industry has taken a deep hit. OPEC+ has extended production cuts through 2021 and USA’s shale oil producers are facing a tough situation due to market price slump. Now, the question of who is going to survive is key. Shell, BP, Exxon Mobil have already cut down on exploration investments while the gas markets have also seen a crash and are struggling to recover.

The Impacts of the COVID19 Crisis on global energy demand and CO2 emissions report highlighted that the demand for oil declined by five percent and natural gas by two percent in the first quarter of 2020. A fall in import numbers from China and an impending global recession has led to an eight percent decrease in demand for coal in the first half of 2020 vis-à-vis the same period in 2019.

The falling demand in global energy markets was further aggravated by the conflict between Russia and Saudi Arabia which had the potential to turn into a war between OPEC and non-OPEC. Even though the OPEC+ came back with an agreement, the differences are still present; potentially altering the contours of the energy game in the international market.

India’s strategy amidst this seems clear.

However, uncertainty makes it tough to finance new projects, significantly slowing the transition to a new energy economy immediately. So, till 2021, the focus is going to be on stability of the economy and for such a strategy to work, suppliers of energy would look for more stable and growing demand centers. India’s strategy would be to leverage this opportunity and look for good Oil & Gas long term deals in terms of trade as well as welcome new investments in the energy sector.

At the same time, countries especially the larger economies on both demand and supply side would look to build its strategy towards preparedness for 2022 and beyond. While internal stability is the focus in the current year, countries are also resorting to effective scientific collaboration using big data, combined lab resources and rapid scale-up of vaccine manufacture in order to get back to normalcy.  The focus will shift to effective partnerships to create technology-enabled redundancy, resilience of economy & business rather than cheaper manufacturing and efficient yet low cost supply chains.

In this context, India expects that US, OPEC+ and Russia cannot work at loggerheads and must collaborate. Therefore, oil prices may rise in later half of 2021 or 2022 onwards due to collaboration strategy as well as supply reduction due to bankruptcy or closure of some of the players and faster expansion of Renewable Energy.

In addition to the above, India needs to adopt a five-pronged strategy – both under progressive optimistic scenario and challenging scenario: