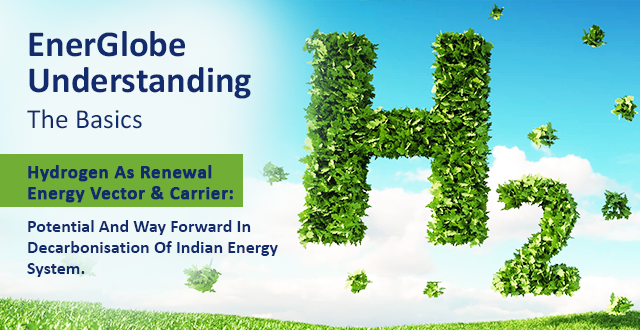 Growing policy interest towards the carbon free economy which is well accepted by civil society and businesses in India requires R&D towards hydrogen as potential energy vector and energy carrier in addition to other alternatives like renewable electricity and natural gas. Today India with production of hydrogen around 6 Mt per annum (Fertilizers and refineries being main contributors).This can increase to around 28 Mt by 2050. Demand will continue to increase in existing sector or growing in to new sector such as steel, transportation (heavy vehicle segment) & heating. In this article author has tried to capture three crucial and challenging  aspect of hydrocarbon value chain i.e. Hydrogen production, storage and transportation as the hydrogen being gravimetric (by weight) high energy density element compared to existing fuel. it has potential to penetrate the market to its rightful share in low/free carbon economy of India.

Hydrogen comes with higher gravimetric energy density of 33-39kwh/kg against 14.88kwh/kg of Natural gas (2.4 time higher) volumetric energy 2.8 -3.3 kwh/L density against 10.1 kwh /L of natural gas (3.6 times lower) hence it demands for liquefaction & cryo compression at higher pressure up to 600 bar (above 800 bar is subject to R&D as on today) and  transition to solid hydrogen (subject to R&D as on today) for end to end competitive value chain compared to other less carbon energy alternatives like natural gas. As on today hydrogen (H2) produced in India using natural gas (which is imported @ $8 /mmbtu) is used for fertilizer, refinery & methanol industry as chemical feedstock. H2 has potential to be used as fuel for heating , generate electricity with fuel cell application in long distance FCEVs as the short distance & other vehicle segment would likely to remain increasing competitive with BEV/EVs (battery operated vehicles). To streamline the generation fluctuation in VREs hydrogen can be produced with 100% zero carbon production technologies as electrolysis (PEM, alkaline based electrolyser - green H2).Steam methane reformation (SMR) and coal gasification with CCUS (Blue-H2) is also mature technology. In addition to above methods H2 can produced by emerging methods of methane pyrolysis, biomass gasification, anaerobic digestion photolysis.

Electrolysis – this is process of splitting H2O in H2   and oxygen .As this is electro-intensive process with 4%share on H2 produce globally the lowest cost electricity from VREs can contribute to make his increasingly competitive in low carbon scenario. In the electrolysis PEM (proton exchange membrane) method widely used owing to its quick startup of less than 30mins and lowest temperature range (50-1000C) and efficiency of 70%. Alkaline method is most mature with low cost compared to PEM with efficiency of 65% output of 50Kwh (unit) /Kg of H2. The electrolysis project in range of 10-100MW are now being planned across the world. Leading manufacturers of electrolyser technologies are currently concentrated in Europe, China, Japan, and the US. Costs of hydrogen from electrolysis today are relatively high at around Rs.400/kg versus Rs140–180/kg from natural gas reformation however as cost of electricity and cost of electrolyser falls the efficiency of electrolyser improves then we can except the reduction is cost of production to Rs.150/kg by 2030 and Rs 80/kg by 2050 in India. Multiple electrolysis research projects are under progress in various institutes like BARC, IIT-Madras.

Steam Methane Reformation (SMR) & Auto-thermal reformation (ATR) with CCUS - SMR accounts for 76% of H2 production globally. ATR is gaining more importance due to its improved suitability with CCUS &higher efficiency. Most recently, Shell has developed their Shell Gas Partial (SGP) Oxidization technology, which aims to further increase efficiency and reduce CO2 emission by up to 100% (Shell Catalysts & Technology, 2020). By considering the cost of hydrogen produced from NG without CCS (grey hydrogen) can be achieved at around Rs 130/kg and Rs180/kg in India (as against Rs.80/kg in other countries), with CCS this cost would be approx.10-15% higher and depending upon nature and location of CCUS facilities. Natural gas price and availability is major contributor for deciding this production by this method.

Coal Gasification (CG)-approximately 130 CG plants are operation today of which 80% concentrated in china.

The import dependent countries like India are significantly looking at the expansion of CG to cut down cost of import. However this can to accomplish with CCUS else it would be carbon burden to low carbon energy system. Prime Minister Narendra Modi announced plans for Rs. 20,000 Cr. ($2.7bn) of investment in coal gasification, to deliver approximately 100 Mt of capacity. Major suppliers, such as Air Products, have also stated their intent to expand the role of coal gasification in India, planning investments of $5–10bn in the next 5–10 years. Significant increase in cost of production of H2 is estimated ranging approx from 20-25% for CG with CCUS compared to without CCUS.

To conclude on product technology in Indian context, cost of renewable electricity production (cheapest in the world for Solar PV -NREL, 2020) as compared with cost of natural gas (import dependent) make country more suitable for generation of green hydrogen when compared other countries of more domestic producer of natural gas. Government policy mandate & business alignment with planed execution probably can enable India to export hydrogen with increasing competitiveness in future.

The cost of green H2 will be much competitive with grey & blue hydrogen by 2030 or before. As per further sensitivity analysis conducted by TERI the cost of green H2 by standalone renewal energy sources is lesser than grid connected owing to efficiency of electrolyser, capacity utilization factor & grid charges.

As on today when it comes to emission intensities of various method of producing hydrogen. H2 production with standalone renewable power stands lowest when compared with grid connected power over 1kg/kwh mainly due to contribution of 0.7kg/kwh emission of Indian grid as on date and production using natural gas when complete supply chain of NG is considered from exploration to utilization is  approx. 0.48kg/kwh. Coal based H2  production is 0.6kg/kwh  India has distinct advantage of cheap solar and reducing wind energy cost  to explore and increase the efficient penetration of carbon free H2 in energy system.

Transportation by pipelines, trucks & shipping can be considered in hydrogen distribution and transport similar to NG infrastructure today. On site production can also be explored after techno-commercial feasibility evaluation. Globally today 85% H2 is produced used on site. Hydrogen being smaller molecular size is more prone to leak and equally flammable as other fuels if this advantages in diffusion coefficient ignored .Transportation of H2 by pipeline is capital intensive process due to its lower volumetric energy density compared to natural gas while liquid H2 transportation required to maintain temperature of -2530C throughout process till point of re-gasification which in turn reduce the efficiency by 25-30% due to conversion process involved. Use of existing pipeline and storage is subject to technical modification as H2 causes embrittlement to steel. Alternative to this found like plastic pipes instead (e.g. polyethylene) (ref-Northern Gas Networks, 2016). The transportation by truck is feasible for small distance but it comes with careful maintenance of temperate of liquid H2 and cryo-compressed H2 failing which boil off losses will be significantly higher is this segment. Shipping will continue to remain costly option even by 2050 under free/low carbon scenario.

H2 can be stored at high pressure (350–700 bar) and low pressure (around 100 bar) depending upon application as liquid it requires -2530C temperature for storage. While the storage in salt caverns is most cost effective (Rs.3.7/kg) which are being used in UK and US extensively. It is unlikely to be used in India due to natural disadvantages. Alternate option of using rock caverns or using depleted hydrocarbon reservoir is being researched as today. Steel tank with proper chemical treatment to eliminate embrittlement is another option but its needs H2 to be stored with 700bar with at 15% of energy density of gasoline hence needs more volume when compared with NG. Research into finding the ways to reduce the size of tanks, and looking at the scope of underground tanks that can tolerate 800 bar pressure is being undertaken (IEA, 2019). Indian Oil Corporation Limited (IOCL) is also working on the development of a Type-3 high pressure hydrogen cylinder in collaboration with IIT Kharagpur. Storage of H2 in metal hydride is also being researched at various institutes to overcome the disadvantage of higher storage space due to lower volumetric energy density.

Conclusion- Hydrogen come as fuel and energy carrier with its advantages unique like energy density and possible carbon free production and drawback of storage and transmission being not sophisticated over long distance as other liquid fuel and natural gas in today’s energy system.   Improved and close co-ordination is required among various ministries of government of India and policy maker to have cluster based hydrogen economy so that single hydrogen production cluster can supply to entire customer base with efficient utilization of infrastructure within the cluster with competitive cost. The support from government is required from R&D to commercialization by way of standards and mandate for industry as this will be of immense contribution for initial penetration of hydrogen in market. The industry wise target for hydrogen mission needs to work out till its end implementation is done for all potential demand side industries like refineries, steel, fertilizer, transportation & aviation.

1. Report published by TERI: The Potential Role of Hydrogen in India

In India prevailing 6MTPA demand for H2 is mostly concentrated to captive utilization and specific industries.H2 carries huge potential of at least 5X over by 2030 owing to its unique advantages of higher gravimetric energy density of 2.4time higher than natural gas.

Unlike lithium ion batteries H2 not new energy source to industry and its safety standards and regulations are well in place throughout the supply chain. In recent times modification these standards are being done as new application of hydrogen is emerging like fuel cell in on journey of net zero of planet. Massive intervention from Indian government along with support from R&D to commercialization is key one of the key to success along with reduction in production cost as demand pickup.

Disclaimer: The views expressed in this article are of solely of the  author of the article ,  EnerGlobe Academy  does not take responsibility for the accuracy of  the data & analysis