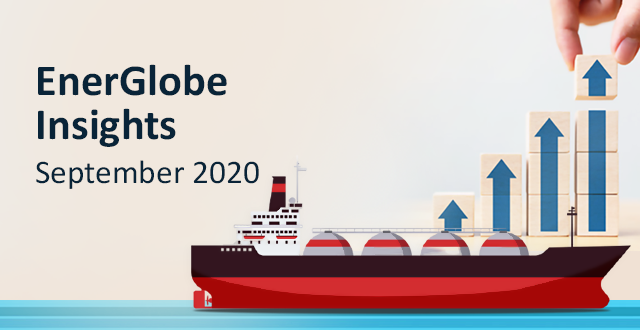 Global Gas/LNG Markets : 2020 and beyond

Natural gas / LNG is going through a tough year in 2020 and may be in 2021 too, where some recovery is expected. Significant demand shock is expected in 2020 as the COVID19 has weakened the demand and the market prices in major markets – Asia and Europe. LNG is facing a tough time in 2020 and may recover in 2021 if the demand scenario improves.

In terms of overall gas consumption across the world, a slowdown in annual growth has happened in 2019 due to oversupply and lesser demand in late 2019 / early 2020 due to unusually mild winter in the northern hemisphere. The economic downturn due to global lockdown due to COVID19 has made matters worse. Europe has experienced a demand fall of 7% in the first half of 2020 year on year and Asian markets like China and India saw a demand slump in April / May though they showed recovery from June onwards and an economic downturn in almost all countries and territories worldwide.

2019 was a record year for LNG market. There was a big jump of 41 MMTPA increase in LNG trade globally, driven by European demand pushing the total global LNG trade to 392 MMTPA. In terms of Final Investment Decisions (FID), a record 70 MMTPA of LNG liquefaction capacity reached the FID stage during 2019, equivalent to almost USD 65 billion investment commitment - which was about 16% increase in global capacity.  Table 1 presents the FID scenario of past few years.

As seen, the dull phase during 2016 and 2017 turned around in 2018 with a transition towards a new phase in the investment cycle. FIDs touched 22 MMTPA during 2018 with three projects - Corpus Christi LNG train 3 in the United States, LNG Canada and Greater Tortue FLNG 1 across the maritime border of Mauritania and Senegal. Then there was a big surge during 2019 with FIDs reaching 70 MMTPA, the highest in LNG history and LNG markets were expected to show a real turnaround and fast paced growth.  Projects reaching FID in 2019 included Sabine Pass LNG train 6, Golden Pass LNG trains 1–3 and Calcasieu Pass (all in the United States), Mozambique LNG trains 1 and 2, Arctic LNG 2 (Russia) and Nigeria LNG train 7. Some of these projects have the largest capacities ever sanctioned and, in many cases, could become the largest private-sector investments in the history of their respective countries. Four projects sanctioned over the past two years report that each of their total capital expenditure will exceed USD 20 billion.

Gas prices: With active global LNG markets during 2018 and 2019, oversupply situation merged in 2019. Coupled with demand lull in Asia, the global spot prices started coming down and fell significantly during 2019, as presented in Table 2.

While US markets have always delinked from rest of the world, it is interesting to note the trends in other markets. The European TTF hub price fell significantly by 45% between 2018 and 2019 while Asian Spot LNG prices fell by 44% during the same period. In fact, Asian and European spot prices fell to their decade lows amidst an increasingly falling demand in main demand centres. In the United States, Henry Hub fell by almost 20% y-o-y to USD 2.6/MBtu, its lowest price level since 2016. In Europe, the record high LNG influx combined with continued strong pipeline deliveries and an unusually mild winter resulted in the Title Transfer Facility (TTF) decreasing by 45% y-o-y to reach an annual average of USD 4.5/MBtu – the lowest since 2004. LNG spot prices followed a similar pattern in Asia, declining by 44% y-o-y amidst ample LNG supply and subdued demand from traditional LNG import markets (including Japan and Korea), while China’s demand growth fell by 50%. However, oil indexed term contracts did not fall that much with the average import price of China, Japan and Korea decreasing by less than 3% - this was due to major share of oil indexed contracts in their overall portfolio.

Demand side impact post COVID19: The pandemic has worsened the situation with further fall in LNG prices during March – May period before the recovery started. COVID19 is seeing the oil and gas industry cutting spending and postponing or cancelling some investment decisions to make up for the severe shortfall in revenue. Economies are forecasted to be on a slow recovery path and hence the global natural gas consumption is heading for an estimated 4 – 5 % drop in 2020. 2020 is projected to be a tough year with a worst kind of demand shock expected in the history of global natural gas market. Global natural gas demand is forecasted to fall by about 150 BCM per annum as per IEA report or 4% y-o-y in 2020. It may be higher hitting up to 5% fall in gas consumption and this drop would be twice bigger than the financial meltdown of 2009, when natural gas demand fell by about 2.2%.  Most of this fall in natural gas consumption will be in developed markets and in case of sectoral fall, it is going to be the power sector, as depicted in the tables 3 and 4.

As one can see, the consumption fall is expected to be maximum in mature markets with North America, Europe and Eurasia accounting for 75% of the decline during 2020. Gas-fired power generation is the most impacted sector with a demand fall of almost 50% in 2020. Europe electricity markets are badly hit due to COVID19 driven by lower electricity demand and growing renewable output. Residential, Commercial and Industrial sector accounts for the fall of almost 40% of gas demand in 2020, due to widespread lockdown.

As per IEA and Global Energy Report 2020, natural gas demand is expected to recover progressively in 2021 in mature markets and grow in emerging markets thanks to low prices. But the impact of demand loss is going to continue over the next few years and markets may not recover to 2019 level in the next 2 or 3 years. The world LNG market will become more dependent on the growing Asian market in 2021 and beyond, led by China and India, wherein market recovery is already taking place and there is also a big push by the governments for expanded gas usage.

Supply Side Scenario:  Most FIDs in 2019 took place in US, Russia and Mozambique. Though these FIDs will be delayed due to the current crisis, post 2021-2022, most of incremental LNG production will come from these countries. In terms of gas production, most incremental gas production will come from US shale, traditional fields in Middle East and the Russian Federation during the same period. But unfortunately, the current crisis and the resultant price collapse and short-term market uncertainty has created a substantial downside risk for these countries / regions. LNG will grow in the coming years though at a much slower rate compared to 2019 and it faces the risk of prolonged overcapacity if past planned capacities come on stream but FIDs of 2019 will face difficulties in making a progress and new FIDs will be hard to come by in 2020 and 2021 which might restore some balance by 2025. But one thing for sure, the coming 5 years are going to be tough for gas / LNG markets especially in terms of price and revenue realizations and therefore competitiveness of the LNG project is what is going to determine success.